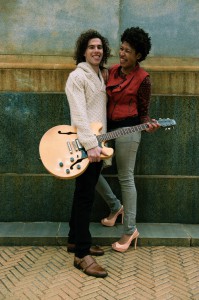 Aziza and the Cure

Symphonic Soul Pop duo Aziza and the Cure is the brain-child of violinist Joelle Britt and guitarist Bradley Rouen, a musically gifted couple sharing their love of composing soulful, melodic ballads with classical & Jazz sensibilities. The two held a successful Kickstarter campaign to fund the recording of their debut album. Appropriately so, they kickstarted their stay at Metrosonic with a live streaming concert held in our Showroom. The concert was simultaneously recorded, mixed, and live streamed. A first for Metrosonic. As you can see in the pictures, a diverse & talented group of musicians accompanied the duo, including Ian Baggette on bass, Jamie Eblen on drums, Jujari Britt on cello, backing vocals, and a string section. 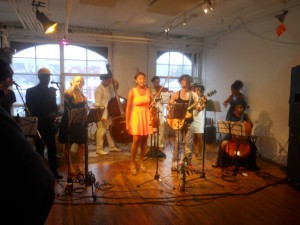 Bradley and Joelle returned to MetroSonic to produce and record their album over a period of two weeks.  The process began with recording basic elements from where the compositions were originally inspired, guitar and vocal parts. Next were drums and bass, followed by strings and vocal overdubs. As seen in the photo, Metrosonic’s RCA 44-BX pair were used to record drums, allowing for the uncolored sound the album aimed for. Later, the string section was recorded in our ShowRoom, also to enhance the recording’s live and realistic feel. 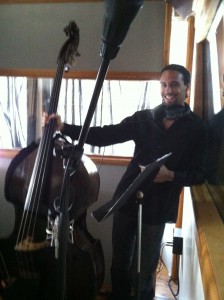 Once recording was completed, Pete worked in solitary mixing the album’s tracks as Joelle and Bradley graciously took some time to talk about the album with us. We began to discuss the concept of the album and what they wanted their listeners to experience. The two exchanged glances and Bradley began, “It is a song cycle, portraying the first few years of our relationship, meeting, being enamored, our issues, societal issues, in order for us to be in a good place. There are themes throughout like an opus, or symphony that reoccur throughout keys, time signatures, songs.  It was not intellectualized, we wanted to have fun writing music, doing things we thought were cool.” Joelle added, “We want the listener to take something out of, it does not have to be how I felt, I want everyone to connect on some level even if its subconscious or subtle. Its a pretty honest album, not just the story, but how we recorded it. Its supposed to be like a live performance, people can relate to that fact, its intimate and exposing. Listeners will feel you’re probably telling the truth when there’s no auto-tune.”  Bradley described a ride he envisioned the listeners to be on with the couple, “They are going with us to all these places, up and down, dynamic changes, an emotional roller coaster. At the end of the album, the first few seconds of silence I want the listener to be there in awe. We want each song to stand on its own and interweave together to form a well constructed tapestry.” 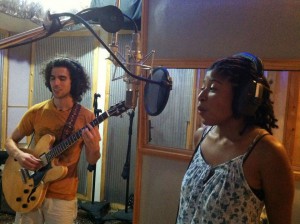 Joelle spoke of the difficulties they encountered while writing the album, “Its about a relationship, and we are trying to put it in one person’s perspective. It’s like, ‘I didn’t do that’, and you reply, ‘Uhh yes, you did.’ There was a lot of growing we did to perform those songs, they were so personal. The first time we preformed we did the songs in New Orleans for Bradley’s friends and family, it was so exposing, I was yelling at him in his house, in front of his mother, like should I stop? Its so hard separating yourself from it, accusing, ranting at the other person. Then explaining it to them, you have to sing like this, cause they can’t sing it right if they don’t understand what they are singing about. Just organizing it was hard, writing for 12 people, especially the string parts.”

Bradley concluded, ” We just want to make the best music we can, live the best we can, and make the world the best it could be. Joelle smiled, “Its true but when you read it or say it, its like sure. Everyone is so jaded, like ‘Hah, right’. Aldous Huxley said words are like laundry, people feel ‘I don’t care about this anymore, I’ve heard it so many times’. We just want to be as harmonious as we can.” When asked about their experience working at Metrosonic, Bradley replied, “Pete got what we wanted without us having to tell him, he captured the concept. It was a special place to perform in as well, the showroom  has a great energy, a supportive environment.”