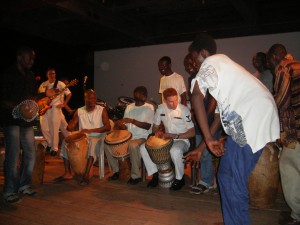 MU2 Chris Cancelliere performing with a percussion ensemble in Accra, Ghana (c.2007) during a deployment with the USS Kauffman (FFG-59)

Anyone who knows me would tell you that my journey has been all but a short one. For 9 years I traveled the planet by air, land, and of course sea, as a Drummer and Live Sound Engineer for the United States Navy Band. From Europe to Africa and the Middle East, to the American deep south and sunny California, the Navy did as promised and showed me a big chunk of the world. It was a defining chapter of my life and I acquired so much knowledge that I would have struggled to find elsewhere. When the time came for me to leave the service I was faced with the dreaded task of figuring out what I want to do with my life (again) and where I wanted to be. New York City. That part was easy. I got in my car in San Diego and started driving east. The difficult decision was choosing the proper path to keep me working with the skills I have, and to continue learning.

A major concern for many service-men/women preparing to transition to civilian life, is how to translate their experience and skills they have learned into a stable career outside of the military. This concern is often magnified for those who performed jobs that don’t necessarily cross over perfectly into the “real” world (i.e. Infantry). Throughout our time in uniform we are constantly reminded of the benefits we are eligible for upon departure, and everyone is required to attend TAP (Transition Assistance Program) within 6 months of discharge. The crown jewel of benefits for many is the “Post 9/11-GI Bill”. The GI Bill is a Department of Veterans Affairs program which provides tuition and a subsistence allowance to veterans attending college after leaving the service. While my 2 official job titles, “Percussion Instrumentalist” and “Sound Reinforcement Technician”, do have corresponding jobs in the civilian world, it’s not easy to walk into another career in music based on that alone. I didn’t want to change fields after nearly a decade of working on my trade so I checked out colleges and universities where I could attend some classes for a while (admittedly, to survive financially while I looked for work). What I really wanted to do was start working again. This is when I discovered the “On-the-Job/Apprenticeship” training program now covered by the GI Bill. It was a perfect solution if I could just find the right place to work. I could continue doing what I’m best at, while also continuing to get better… but where do I go? 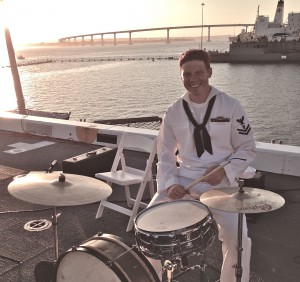 MU2 Chris Cancelliere, posing in front of the Coronado Bridge before playing a VIP event on a flight deck in the San Diego bay (c.2012)

After searching various databases and combing through several sources I found MetroSonic on a Department of Veterans Affairs job website. It was the sole listing for recording studios in New York participating in the GI Bill’s “On-the-Job/Apprenticeship” program. I set up an appointment with Pete and the rest is history, as I’ve been here at MetroSonic ever since. I can hardly imagine another situation that would allow me to work and put all of my focus on my trade vice making time to study and learn between shifts at another job. The skills I’m developing at MetroSonic are not only useful in this studio, but are unique and valuable worldwide due to the variety of equipment available to learn about, not to mention the extraordinary knowledge of the rest of the staff. I’m extremely grateful for the opportunity to be here, and look forward to a long future of making great music right here in Brooklyn.
My story has been a fortunate one, which inspires me to pass my experience on to my fellow servicemen who are approaching their end of service and want to keep moving forward with their dreams. There are many options out there for those of us who answered the call of duty, and I encourage everyone who served or is still serving to utilize them to the fullest! Signing up for the Armed Forces is frightening enough. Leaving doesn’t have to be. Thanks to the VA and MetroSonic, I morphed from “Petty Officer Cancelliere” to “Chris” without skipping a beat.