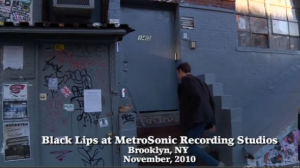 Atlanta’s raucous Black Lips and Amy Winehouse/Lily Allen producer Mark Ronson — whose album Record Collection came out in September — might seem like an odd couple. But as Ronson says in this video, “You can tell when you’re working with people who love music as much as you do because there’s an excitement to it.”

Ronson is helming the band’s sixth LP, due in the spring, and judging by the material captured here, he hasn’t changed what he calls their “lo-fi garageness.” The sound is a bit tighter but the songs could have come from any of the group’s recent LPs.